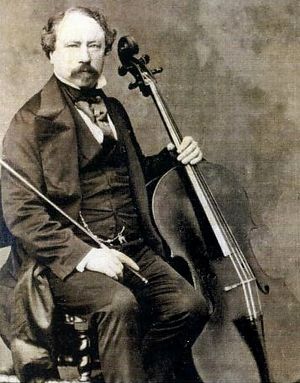 Below is a list of editions currently available for purchase.

Say the word "caprice," and our minds immediately go to Paganini and Piatti. However, other composers also wrote caprices as studies, among them François Servais (1807-66). Servais was a Belgian cello virtuoso and composer. As was typical of the Romanic Era composers, the bulk of his output included opera fantasies and variations on popular themes. Our new edition of Servais's 6 Caprices is based on the two first editions, Richault (French) and Schott (German), graciously provided by the Servais Society, faithfully combined into a beautiful, newly engraved, critical edition. Our edition is the first to include a score of the two cello parts. All the textual variants between the two first editions are noted in the footnotes. Our edition also comes with separate parts, which include Servais's original fingerings.

Servais - Caprice No. 2, Op. 11 for Cello and Piano (Transcribed by Louis Lubeck)

Caprice No. 2 is a perpetual motion in rondo form, exploring the spiccato bow stroke. This Caprice was arranged for cello and piano by the Dutch cellist Louis Lübeck (1838–1904). The cello part is virtually the same as Servais’s original, however, Lübeck adds several fingerings for clarification as well as very specific dynamics to aid with phrasing. The piano part is freely composed, rarely using material from the original second cello part. This arrangement would make a brilliant encore.

Carnaval de Venise was first penned under the title “Fantaisie Burlesque,” dedicated to Arkady Rachmaninoff, the paternal grandfather of the famous Russian composer. The published title page retains the title of “Fantaisie Burlesque” but adds the subtitle “ou le Carnaval de Venise.” Many composers used this theme of “Cara mamma mia” for their variation sets, including Niccoló Paganini and Heinrich Ernst for violin, and Friedrich Dotzauer for cello. The latter set was published only a year prior to the set by Servais, in 1850.

Carnaval de Venise, like many other fantasies by Servais, is constructed in variation form. The introduction is based on a song about Pulcinella. This melody makes another appearance later in the Fan-taisie finale beginning in m. 278. The main theme of the work is the aforementioned melody “Cara mamma mia.”

The Fantaisie has two key centers and some chromatic peculiarities. The introduction centers around the key of A, both major and minor. The recitative that follows begins in A minor and makes the music seem like it will return to A major, but then abruptly turns to C major for the “Cara” theme. The “Cara” theme is treated with two variations, exploring octaves, trills, up-bow staccatos, and the entire range of the cello. Variations 1 and 2 are followed by a short, orchestral interlude and a longer, unnumbered, slow variation in E major. The next interlude is lengthier than the first. The finale begins with the Pulcinella melody in A major. In one of the Pulcinella iterations, at mm. 286-293, the tonality is obscured with chromaticism. The rest of the work is filled with virtuosic arpeggiation in the solo part, while the orchestra mixes the Pulcinella and “Cara” themes.

Servais composed three concertos for the cello and orchestra as well as a Morceau de Concert, a one-movement concert piece. The Concerto in B minor, Op. 5 was the first work in the genre, composed c. 1836. The Concerto was dedicated to King William II (Guillaume II) of the Netherlands. While other works were dedicated to William II, his son William III received many more dedications such as David Popper’s Polonaise Op. 14, Henri Vieuxtemps’s Cello Concerto No. 1, and Amboise Thomas’s opera Le songe d'une nuit d'été.

Servais’s B-minor Concerto consists of three movements. The outer movements are in sonata form, although the recapitulation of the first movement is truncated after the orchestral return of the first theme. After the grand pause, the second movement, Adagio cantabile, enters with strumming strings accompanying a serenade-like melody in the cello part. The finale is a tour-de-force for the soloist. The second theme of the finale is initially presented in the subtonic key of A major, returning in B major in the recapitulation. While there is no tempo change indicated, the coda of the finale is typically taken at a slower tempo because of the increase in the surface rhythm. This coda was, arguably, influenced by Rossini and Donizetti. The motive found in the upper strings could have in turn influenced the coda of Pyotr Tchaikovsky’s Variations on a Rococo Theme. The major-minor figuration in the last few measures of the solo part is similar to the one found at the end of Servais’s Le Désir.

Our edition is based on the first edition published by Schott in March 1848. We consulted both the orchestral version as well as the solo part published by Richault in preparation for this edition. The Richault edition was missing some fingerings that were present in the Schott edition. Some additional fingerings present in the cello cue line of the piano score were also inserted into the main text except for m. 19 of the second movement, where the use of the thumb seems like a printing error.

Fantaisie et Variations brillantes sur la Valse de Schubert intitulée le Désir began its life as “Hommage à Beethoven.” Although the waltz was rightly published under Franz Schubert’s name by Diabelli ca. 1822 as “Trauer oder Sehnsuchts Waltzer,” it was misattributed by another publisher as being by Beethoven. After this misattribution, the waltz became known as being by Beethoven. Carl Czerny’s ca. 1821 variations on this theme are simply known as “Variationen über einen beliebten Wiener-Walzer.” Friedrich Kummer still attributes his variations to be on a theme by Beethoven in 1835, but by 1844 Servais had renamed his “Hommage” to a “Fantaisie” on the theme by Schubert. However, Servais left “Le Désir” as the subtitle of the waltz instead of the original “Trauerwalzer” or “Sehnsuchtwalzer.”

Our edition is based on the first edition published by Schott in 1844. We consulted both the published orchestral version as well as the manuscript for this edition. The manuscript differs too much to be considered a source for our edition, however, it demonstrates how the work was heard by its early audiences.

The Fantaisie et Variations is in 5 parts, with all of the sections having A, either major or minor, as the tonal center. The opening theme of the Fantaisie et Variations is a minor version of “Chacun le sait chacun le dit.” This is the only section where the solo cello has an obligatory tacet. A recitative, based on “La voilà! La voilà...” follows the introduction. The theme and four variations on “Chacun le sait chacun le dit…” are the centerpiece of the Fantaisie. Each variation explores one or two techniques: var. 1 – long shifts and string crossings; var. 2 – long bows and syncopated bowing; var. 3 – artificial harmonics; var. 4 – octaves. It is important to note that David Popper’s Etude Op. 73, No. 38 is based on the figuration found in mm. 225-232 of this Fantaisie, a figure that Victor Herbert also used in his Second Cello Concerto. The Fantaisie continues with the Romance “Il faut partir mes bons compagnons d'armes” and finishes with the Finale, based on “De cet aveu si tendre…” The figuration in mm. 324-337 was famously memorialized in the first movement of Antonín Dvořák’s Cello Concerto, Op. 104.

Servais had a close relationship with Russia, Ukraine, and Poland, and his compositions reflect this. He first went to Russia in 1839–40. According to Peter François, this is when Servais composed and performed Fantaisie sur deux Airs Russes for the first time. This Fantaisie is based on the songs Соловей (The Nightingale, 1827) by Aleksandr Alyabyev (1787–1851) and Красный сарафан (The Red Sarafan, 1838) by Aleksandr Varlamov (1801–48). Servais dedicated this Fantaisie to Count Mikhail Vielgorsky (1788–1856), a Russian official, composer, and patron of the arts. Mikhail’s brother Matvey, an amateur cellist, was the dedicatee of Servais’s Morceau de Concert, Op. 14, and Felix Mendelssohn’s Cello Sonata No. 2.

François Servais (1807-66), a Belgian cello virtuoso and composer, was one of the more imaginative fantasia composers. One of the most interesting of Servais's fantasias is the Grande Fantaisie sur des motifs de l'Opéra le Barbier de Séville de Rossini, Op. 6. The Grande Fantaisie is in 4 parts, resembling a mini sonata. Our new edition of this work is based on the first edition, originally published by Schott in 1848, graciously provided by the Servais Society, faithfully combined into a beautiful, newly engraved, Urtext edition. The holograph manuscript from 1843 was also consulted. However, the 1843 version of the Grande Fantaisie is much too different from the final version to consider as a source. You may read more about the details in the fantasia at this link: https://yuriyleonovich.com/home/blog/critical-notes-series-servais-s-barber-of-seville-fantasie

Souvenir de Spa was first penned under the title “Fantaisie pour Violoncelle,” dedicated to the Duchess of Looz. The published title page contains the new title of Souvenir de Spa with a dedication being ex-panded to read “composée et dédiée à madame la Duchesse de Looz Corsvarem [sp.].” Looz-Corswarem is a Belgian ducal family belonging to the Belgian and as reigning Princes of the Principality of Rheina-Wolbeck, they also belonged to the German nobility. Souvenir de Spa, like many other fantasies by Servais, is constructed in variation form. The theme seems to be Servais’s own but has thematic and rhythmic similarities to Beethoven’s Septet, Op. 20, opening movement. The work begins with an introduction in A minor, followed by a cadenza and an accompanied recitative. The A-major theme is a rather lengthy 48 bars. Since the theme is on the longer side, Servais opts for a four-variation model. The first two variations are harmonically similar to the theme. The third variation is slow, lyrical, and chromatic, almost Wagnerian in places. The final variation is rhythmically identical to the finale from the Grande Fantaisie sur des motifs de l'Opéra le Barbier de Séville de Rossini, which is based on "La testa vi gira."

Souvenir de Spa was so popular that it was quoted in works by Johann Strauss Sr. and Sydney Smith.

François Servais (1807–66), a Belgian cello virtuoso and composer, was one of the first cellists to transcribe the E-flat-major Nocturne, a work that is almost synonymous with the name “Chopin.” Servais transcribed this Nocturne for cello and piano in D major, a key better suited for the cello. This transcription closely follows Chopin’s original text, more so than later transcriptions by Pablo Sarasate and David Popper. In three places, Servais gives the cellist an “easy” and a “difficult” option. It is the “difficult” reading that is closest to Chopin’s original. From 1863 to 1938, Schott printed over 7,000 copies of Servais’s transcription for cello and piano. In the 1910s, this transcription was recorded by Anton Hekking, Joseph Hollman, George Rogovoy, and Thomas Weist-Hill.