For this Installment of "Critical Notes Series," I would like to introduce my newest, long-awaited orchestration of Klengel's Concertino No. 1 for cello and orchestra. Klengel never orchestrated this work, leaving it for cello and piano, as with the other two concertinos. For some, Concertino No. 1 is the first concerto in their repertoire. In my pedagogical curriculum, Concertino No. 1 follows either Romberg's Sonata Op. 43, No. 2 or Goltermann's Concerto No. 4. This Concertino shares many traits with Romberg and Goltermann's works. With Romberg, it shares the brilliant C major arpeggio opening (both in tonic and dominant), a 3-part exposition, a pastoral, F-major slow movement, and a quirky rondo with similar melodic outlines. With Goltermann, the Concertino shares similar accompaniment figures and the early romantic flair of Beethoven.

Before I knew that there was a popular demand for this piece to be orchestrated, I wanted to play it with a string quartet. Here is the first page of my first attempt to orchestrate it 20 years ago as a teenager. 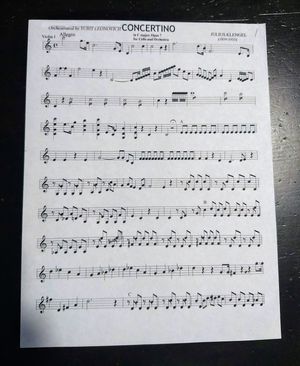 At the time, I was just learning how to use Finale 97. This orchestration might have had a bass part, too, but I don't have all the parts anymore. I've revisited some of my projects from high school. Some of these include the rewriting of my Rusalka Fantasie and reusing themes from my old compositions. The Klengel Concertino has been on my mind to redo for the last 15 years or so. Since I began teaching it as part of my core curriculum, I got a greater urge to orchestrate it for my students. From time to time, I've seen cellists asking about an orchestration on the Internet Cello Society, which kept reminding me that I have this piece sitting on the back burner. Finally, the spring quarantine of 2020 got me working on this long-neglected project. I've had 20 years to develop ideas about how to approach orchestration. Every time I accompany my students on the piano, I hear orchestral instruments in my head, so much of this orchestration wrote itself. It took me about a week to enter all of my ideas the way I imagined them. 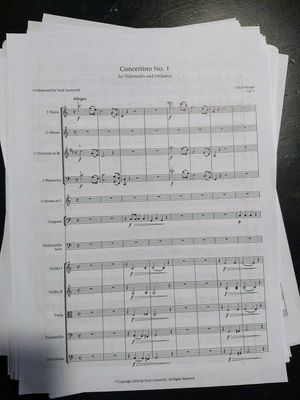 The reason why I included this orchestration in my "Critical Notes Series" is because I made many corrections to the cello part, including adding missing accidentals, fixing articulations, hairpins, slurring, etc. These errors are in the Breikopf and International Music Company editions. I used Klengel's original fingerings, but sometimes there were clear errors with regards to the number or placement. Some of the corrections were also reflected in the orchestra parts, as the Breitkopf piano part also had a few mistakes. I used editorial marks such as brackets and dashed slurs and hairpins.

I took some liberties with orchestration, like adding a march rhythm in the timpani in the beginning, but for the most part, I tried to stay as close to Klengel's text as possible. Mine is not the first orchestration of this work, and probably not the last, but I tried to create an authentic-sounding instrumentation that would add power and emotion to this already great student concerto.

My orchestration is now available on Sheet Music Plus for purchase. Please follow these links purchase or see examples: Orchestra Score and Orchestra/Solo Parts. You may also hear a NotePerformer 3.3 performance of it here on YouTube with a scrolling piano part for comparison. I've added and revised a couple of small things after posting the audio on YouTube, but the additions shouldn't be too noticeable.

I hope that this new score will become as much of a staple as the work itself.