Next month, my orchestra is playing Haydn's G-major Violin Concerto. As with every piece I play or conduct, I also research it. Many good articles have come out in the last decade talking about Haydn's concertos. It is not my intention to compete with the brilliant scholars, authors of those articles. I would like to present a small series of blogs looking at the sources for the Haydn string concertos.

The first source I would like to look at is The Breitkopf Thematic Catalogue 1762-1787. This catalog is much like what we see major publishers put out quarterly or annually with regards to their recent publications. The Breitkopf Catalogue contains around 15,000 incipits (the opening music of a manuscript). I laid out Haydn's string concerto musical examples below in chronological order, top to bottom. 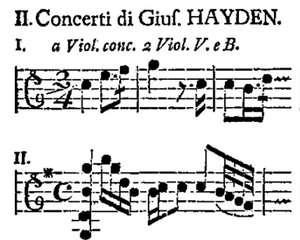 Having seen these incipits, you might be asking yourself the following series of questions. Where are Haydn's 2 cello concertos that we know today? Why is Haydn's name spelled with an "e?" Why are 3 of the 5 examples miscatalogued? Those are fair questions to ask when you are looking at a source that is deemed credible by scholars. For me, this source is very interesting. It comes from Haydn's own time. Why did not Haydn refute the information in this catalogue if the information was not true? Perhaps Haydn scholars can answer this question better than I can. Perhaps Haydn did not care; maybe he thought it was an honor do have his name on someone else's work. Our views on intellectual property are much different than the views held in the 1400s-1850s. We see much misattribution and plagiarism in that time frame. Eccles and Berteau come to mind.

But how do we learn from a list of works that has been falsified. One thing is true: Breitkopf had these manuscripts in his possession, and the names on those manuscripts were most likely the ones listed in the catalogue, whether true or not. Why do we not see Haydn's now-famous cello concertos (C and D) in the catalogue? The simple answer is that the manuscripts did not come to Breitkopf's office in those years.

Looking at each excerpt individually, we will find that only one it catalogued correctly, the Violin Concerto Hob. VIIa1. It is very doubtful that Violin Concerto Hob. VIIa:4* is by Haydn, as it does not appear in Haydn's personal catalogue; a likely candidate is Leopold Hofmann. A manuscript with Hofmann's name exists in an archive in Berlin. Hofmann's style is identical to VIIa:4*. The next excerpt you see is the one of Haydn's Violin Concerto Hob. VIIa:3, but it's listed as a cello concerto with 2 horns and strings; this is a mistake. The following excerpt is of the concerto we commonly call Haydn's "Little D major," Hob. VIIb:4. But we know now that this work is by Giovanni Battista Costanzi. The final excerpt is of a cello concerto that is believed to be lost. Hoboken catalogs it as VIIb:g1. To my eye, this incipit looks more like baroque Italian music and not 1773 Austrian music.

I hope that you enjoyed this first part in my Haydn Concerto series. If you would like me to cover anything specific in the next few blogs, I would love to hear your suggestions.