Historically, Dvořák's B-minor Cello Concerto, arguably, has only been rivaled by Haydn's D-major Concerto with its endurance in cello history. Although, the work has gained more competitors later in the 20th Century in concertos by Schumann, Prokofiev, Shostakovich, and others. Dvořák's Concerto has grown in popularity as a research topic, from technique to composition style, to its role in the cello repertoire. We have come a long way from the reader-digest style program notes that talk about the Concerto's relation to the Op. 82 song "Leave me alone" in dedication to his sister-in-law, and the thematic similarities to the New World Symphony.

To date, there have been no fewer than five scholarly editions of the Concerto published, including Supraphon (ed. Bartoš, 1955), Peters (ed. Pommer, 1976), Breitkopf (ed. Döge, 2001), Bärenreiter (ed. Del Mar, 2011), and Henle (ed. Oppermann, 2021). There is also a compendium to the Concerto by Jan Smaczny in the Cambridge Music Handbook series. The forewords, commentaries, and appendices of the abovementioned editions are all quite interesting and informative, especially those put together by Otakar Šourek for the Supraphon Complete Dvořák Edition, which contains the printed alternative versions from the autograph.

Since 2017, or perhaps 2012 to be more accurate, I've been working on my edition of Dvořák's Concerto, more specifically, the cello part with all of its variants. The question I ask myself often is "what can I offer the cello community?" With over 70 urtext editions in my catalog, I did not want to make just another Dvořák cello part to rival the big publishers. I wanted to provide a resource for my colleagues and students to use as a guide alongside their favorite edition.

I am also offering a version for purchase, a set of engraved and formatted-for-performance sources. This version will allow you to experience playing from each source 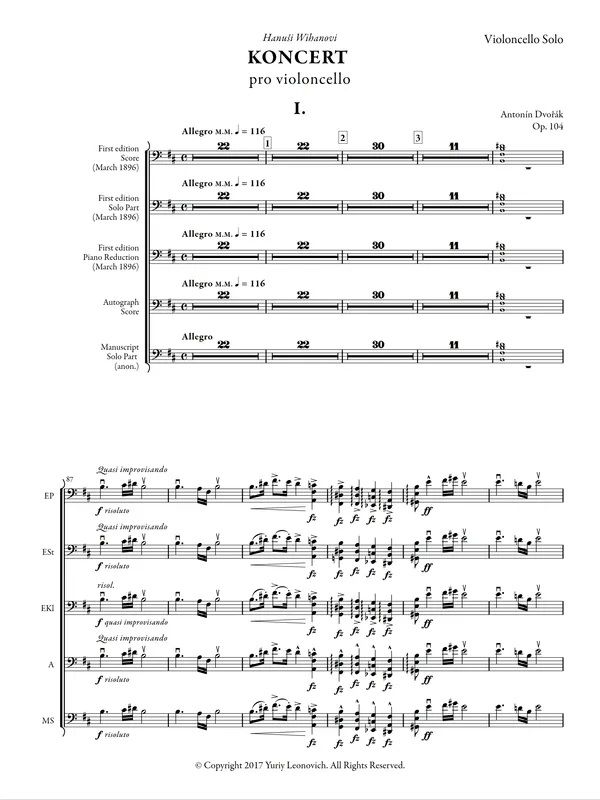 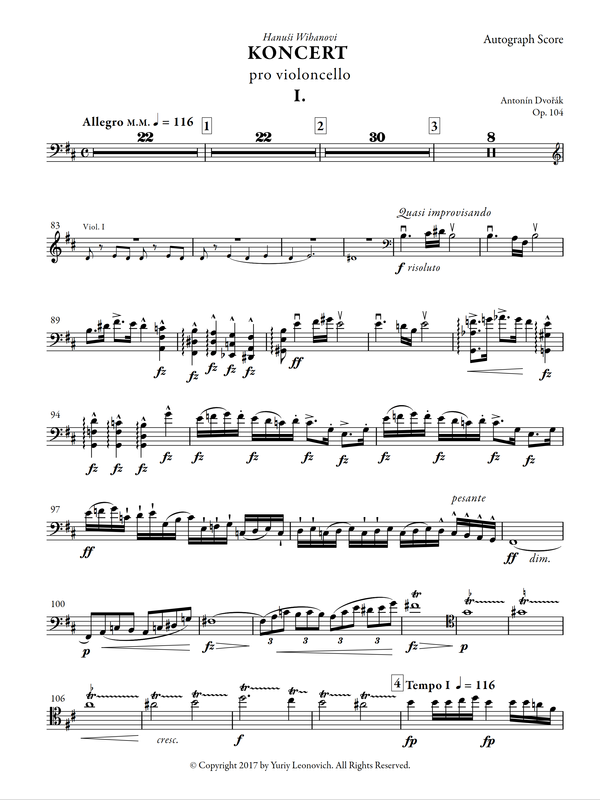 Because this Concerto enjoys great popularity, it has been surrounded by mysteries and myths. I am not on a journey to solve any mysteries and am skeptical of those who claim that they have solved/almost solved the mystery of the source transmission, or have identified all/most of the errors in the sources. What we know for a fact is that Simrock published the orchestra score, orchestra parts, piano reduction, and the solo part in March 1896. There is no question about this happening. All of the printed sources were printed with Dvořák's approval. However, there are differences between the solo line in the orchestra and piano scores, as well as the separate cello part.

Myth #1: the solo staves in the piano score and orchestra score are the same. They are not remotely the same. When we analyze the sources we must take into account the pitches, rhythms, articulations, tempo, expressive and dynamic texts (and their placement), hairpins, slurs/ties, and even the beaming, to name just a few things. The cello line in the piano score can be seen as a middle ground between the orchestra score and the solo part, but it is a source all on its own with unique features. The autograph piano reduction does not have a cello line above it, hence we must accept that the piano reduction engraver had a unique source to work from. A reputable engraver does not make unapproved changes.

Myth #3: the simplified version of mm. 257-260 in the first movement originates with Emanuel Feuermann. This pattern of notes appeared in the second printing of the solo part within Dvořák's lifetime. The first and second printings of the solo part are identical in every respect except for those 4 bars. It is true that the original descending pattern is quite challenging. This is why the alternative was provided in subsequent printings, which can be found in the music archives of most cellists who played the Concerto in the early 20th Century. The famous, double-stop "Casals" version of this passage is simply the second-printing version filled out.

Myth #4: the anonymous manuscript is not relevant to the published solo part. While this source contains the original, shorter coda of the finale, many peculiarities found in the published solo part are also found in this manuscript, such as the G in the first movement m. 90, the 3-bar-rest error in m. 268 of the same movement, most of the beaming, bowings, and cues. There is no doubt that this manuscript is part of the transmission history of the solo part. One peculiar vestige from this manuscript is found in the "molto espressivo" marking in m. 347 of the third movement. The melody that was there originally would have worked well to be "very expressive," but the 6 bars of trills do not make sense. Three other sources leave "molto espressivo" in m. 347, while the published solo part moves it to a better place of m. 355. Another interesting thing to note is that the manuscript solo part contained many of the revisions done in red ink in the autograph score, yet had empty bar gaps in places where Dvořák was not settled on the reading. Some of the readings in the manuscript solo part ended up being published ossias. This is an important document in the solo part transmission. I would like to thank Jeff Solow for introducing me to this source.